Posted by Zebra question at 4:58 AM No comments:

An evening in UB before I see Shadow!!!!

Last evening in the city before I set for the longest walk in my life. Everything is unknown, unexplored, unimaginable. But, that's the fun! Tomorrow morning at 4.45 we all fly to Khovd by Eznis Airways. We then take a jeep to a place called Bulgan which is another 400 kms from Khovd. Bulgan is the starting point for us.

I am so excited to see Shadow! Shadow is the name I have chosen for my camel. Thanks to my sweet sis- Neha- for the name! Shadow will be the name of my camel so that I will always have shadow with me in the scorching Gobi heat!

The wait will be over soon and I will be off from FB, phone, twitter, or any form of communication with the external world! I will be with the 12 team mates in the vast expanse of Gobi. Well, I will be so busy and so empty. I am not sure what I am going to do. I don't know what does a person has to do when cut from the known people. The wind, the heat, the cold, the shiver, the sweat, the blood, the pain, the camels, the buddies, the stories, the experiences, the tents, the wet wipes, the food, the sleeping bag, the sun-block, the blisters,.... these will be the talks of the coming days... and I am all set for it...

Posted by Zebra question at 7:25 AM 2 comments:

The curious case of Nalanda's pillow

We were dying to get some sound sleep from Delhi. Me and Nalanda slept tight in our flight from Delhi to Shanghai and from Shanghai to Beijing caring for nothing except food. Nalanda all the time was hugging her blow-up pillow right from Delhi. We landed in Beijing and had almost seven hours to spend at the airport. We took the trlley and put 41 kgs of our bags on the trolley along with the 300 grams pillow.
In Delhi, the Air China checked-in our entire baggage, gave us a tag and promised that we could collect our baggage directly in Ulanbaatar, Mongolia. At Beijing airport, we were a bit skeptical to believe that the baggage would diretly go to UB. So we decided to wait and check if the baggae arrives in Beijing. And it did!!!! Thank god we did not trust the airline. Else we would have been in the same boat as Peter who lost his baggage while coming form Spain.

Anyways, the story is about the pillow. After collecting the bags we were romaing around the airport inquiring at the information centre how we could best utilize the seven hours that we had in hand. Suddenly, Nalanda realized that her beloved pillow was no found on the trolley. We were now frantically searching for the pillow on the entire airport. We wen up and down the three floors a numbre of times with the baggage looking for the pillow. We had our eyes on the ground looking each and every navy blue color, rectangular, blows-up thing. We searched and searched, enquired at the lost-and-found section, took pains of explaining to them in English what had happened and what we needed from them. Our creative juices started flowing and we thought that we could ask the sweepers on the airport if they found any pillow-like thing. We did try to communicate with them- first in English and then with sign language- but in vain! A girl at the enquiry who understoon English helped us and she wrote everything on a piece of paper in Chinsese script. She asked us to show the paper to the sweepers. We thought it was a fantastic idea. We again went up and down the three floors behind all the sweepers of the airport showing them the piece of paper. They would read it and direct us to the lost-and-found centre again. :( where we had already tried going to.

Well.. we could not find the pillow but yes we successfully spent almost three hours of the seven hours that we had in hand. Nalanda now misses her pillow and has decided not to buy another one in the loving memory of her lost one.

I wish I had a picture of her pillow to put up. We will only cherish the pillow in our memories!
Posted by Zebra question at 2:49 AM 6 comments:

This morning, I spent 14,490 bucks for a soap, a water bottle, 2 rolls of toilete paper, and a facewash. 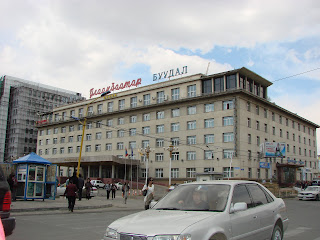 I am already liking the city. The city took me by surprise. I see all signs of modernization- tall glass buildings, shopping malls with all the latest brands, smartly dressed girls who look to be busy in their lives.

While walking to the Eznis airlines office, did we see the State Great Khural- the building of the Mongolian parliament. 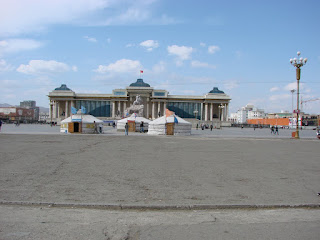 Whisle coming back to the hotel, I noticed a group of people playing chess and gambling :) bang opposite to the parliament building :).

Me and Nalanda were walking on the Beijing airport searching for some veg food and we saw a lady refilling water at one of the water stations. She was Carrie. I did not even have to think twice before I called her by name. It was so amazing to see her there and to immediately connect with her. Same with Andrea.

Me, Nalanda, Andrea and Carrie arrived in UB together. Carrie tells me that we need to live up to our reputation of the bad girls of Gobi. Lets see how we succeed.

Looking forward to meeting all tomorrow morning...!!
Posted by Zebra question at 11:03 AM 2 comments:

The film is ready to be released!

It's just three days before I set to walk the longest distance I have covered so far on foot. I sit back and think what made me take this decision? Why did I think of walking 1600 kms in the desert? And how is it that I have been happy ever since I made that decision? What all happened after I decided to walk those thousand miles with 12 other like-minded crazy people from across the globe?

After the decision was made, I think a clap-boy came and clapped, the camera started rolling, and I heard "ACTION". Oh my god!!!!! I was acting in a film. All my actions were directed by a film director who resided somewhere deep in my sub-conscious. I was just playing a good actor, who is a director's delight. I ran marathons, I dragged tyres, I worked-out, I walked, I trekked, I swam, I argued with friends on the ideal training plan, I pulled them into the training along with me... but no no... it was not me! It was my director who wanted me to do it.

The shoot is now over and the film is ready to be released. Whatever happens from now onwards is the result of all those efforts that my director put in to make me perform the best.

But hey, now is the time to free myself from the director. I am now set to watch the premier of the film. I will not be performing now! I will be watching my own performance on the screen, live!!!